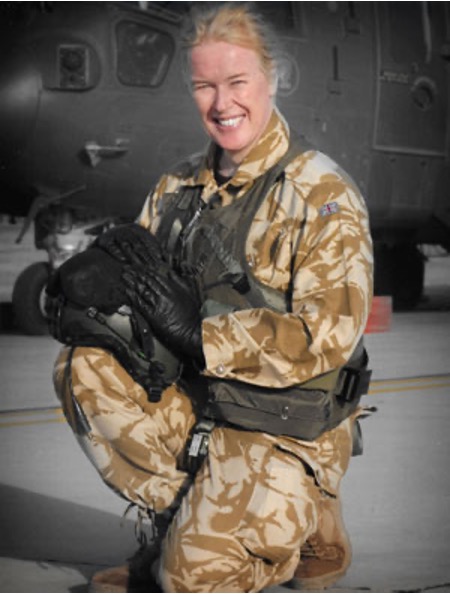 Caroline joined the Royal Air Force in January 1980, serving 35 years as a navigator on fast jets and battlefield helicopters. In February 1999 she became the first openly serving transgender officer in the British Armed Forces. Caroline flew air defence fighters, providing air defence of the UK and Falkland Islands during the Cold War, and deployed to Saudi Arabia during the build up to Gulf War 1. In 1992 she volunteered for trooping helicopters, seeing service in Bosnia with the UN in 1995, and in Northern Ireland.

Her gender transition raised demands for her immediate dismissal, as ‘a liability and danger to personnel on operations’, but Caroline became a highly respected tactics specialist receiving several commendations ‘for exceptional service’ in Iraq and Afghanistan, including a CinC-Air Commendation in the Queen’s 2012 New Year’s Honours List. In 2011 she received a Permanent Under-Secretary MoD award for her trailblazing service and dedication to evolving tri-service transgender inclusion policy and support.

After retiring from the RAF, Caroline formed her own company, teaching tactics skills to European military helicopter crews, and as an inspirational speaker, championing diversity and inclusion with businesses, charities, universities, and schools. She has written articles and blogs and participated in over 40 TV and radio interviews. Her autobiography True Colours was published in 2017 and she is a co-author of the military LGBT+ anthology Fighting With Pride.

Caroline is a Patron of Liverpool City Region Pride Foundation, a member of Liverpool Football Club’s LGBT+ Advisory Group, a Stonewall School Role Model, and Honorary President of No 472 (Hoylake and West Kirby) Squadron, RAF Air Cadets. In June 2021, she won the 2020 British Ex-Forces in Business Awards’ Champion of Women Award (delayed due to covid restrictions).

On 5th July 2022, (also delayed from 2020 due to Covid), Caroline was awarded an Honorary Doctorate by Middlesex University, for her relentless work, commitment and achievements in EDI.‍